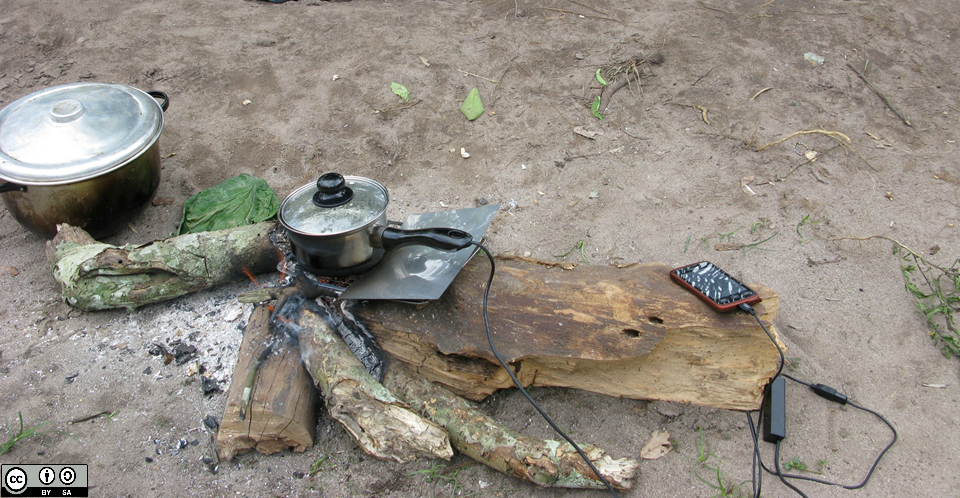 I’m at the Ecological Society of America’s annual meeting (Twitter hashtag #ESA2012) all week, in Portland, Oregon, USA, hearing lots of amazing stories and getting incredibly excited about science (and scientists). I want to share my favourite thing so far, from the pre-conference meeting on public participation in scientific research (a.k.a. citizen science, #PPSR2012). It’s a way to charge a smart phone in the middle of the jungle using a cookpot over a fire.

The story here comes from Muki Haklay, professor of geographical information science at University College London, where he directs the Extreme Citizen Science group. These guys are doing all kinds of way cool things to get people who are normally shut out of science—poor people, illiterate people, people in remote areas—involved in scientific research. Haklay began his talk by asking, “Imagine if anyone could take part in scientific research, regardless of literacy or education.”

The photo is from Cameroon, where local communities have been using Android phones (with a specially designed pictographic app) to collect data on illegal logging and poaching. The problem? How to charge those phones. So one of Haklay’s group tracked down this solution: A Japanese invention that uses the temperature difference inside and outside the pot to generate a current that charges the phone. It works.

You can follow Haklay on Twitter at @mhaklay, and the Extreme Citizen Science group at @UCL_ExCiteS. I’m really looking forward to seeing what they do next.