What really killed the passenger pigeon? 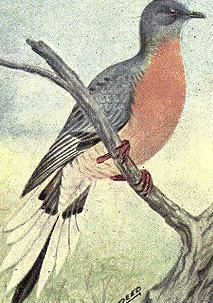 Jessica Stanton is a detective investigating a trail that’s been cold for over 100 years. She wants to know what really killed the passenger pigeon—and she’s not taking anyone else’s word for it.

Stanton, a Ph.D. student at Stony Brook University, presented last week at the Ecological Society of America’s annual meeting in Portland, Oregon, USA. Her research focuses on questions like how long it takes a species to go extinct, and how, and how much, we can help it once it’s on that path. Stanton wanted to look at a case study where we knew the outcome, so she could model the phases of decline and extinction. The passenger pigeon was especially fascinating because it was abundant and wide-ranging, which usually means a species isn’t at much risk for extinction. Yet its numbers went from billions to zero in less than 100 years.

She used a standard, matrix-based mathematical population model. She had to put in some baseline variables: fecundity (number of chicks per pigeon per year), survival (number of chicks that survive to breed), and baseline hunting (by Native Americans and settlers). Then she had to add things like commercial hunting, nest disturbance and habitat loss.

But Stanton had to turn to the historical record to piece together the data for the model. She pulled out much of her data from the 1955 work The Passenger Pigeon: Its History and Extinction, by A.W. Schorger. The book itself is descriptive, but Stanton says it’s loaded with data, if you dig for it. There were first-hand reports of hunts, and there were shipping records. From the two, she estimated upper and lower bounds for commercial hunting. She took the first-hand descriptions of nest locations the book provided and correlated them with lat-long coordinates from Google Earth. Then she went through old issues of the Wilson Journal of Ornithology and The Auk for nesting records, and she used museum specimens that had locations and dates and were collected during breeding season.

No one had ever measured survival and fecundity for the passenger pigeon. But from observations, we know that it laid one egg at a time, and probably only nested once a year. From captive birds, we can estimate maximum longevity. And luckily, these parameters don’t vary too much among different species of pigeon, so Stanton was also able to look at the passenger pigeon’s close relative, the band-tailed pigeon, to inform her model.

One thing Stanton learned from the model: it’s really hard to wipe out billions of birds. No level of hunting, even the most extreme, drove the birds to extinction on its own. Adding habitat loss sped their decline, but the chance of extinction was still very low. Adding in simple variability, arising from the fact that the birds were nomadic and relied on an unreliable resource, increased the risk a little more. Nest disturbance had the greatest effects, but only at the highest end: you’d have to lose two-thirds of all nests about once every three or four years—and even then, the chance of extinction is only about one in five.

Stanton’s next step will be to reconstruct the passenger pigeon’s decline using the IUCN Red List categories. At the conference, she presented one dramatic possible scenario out of many from her early analysis. It showed the pigeon going from “Least Concern” to “Extinct” in only about a dozen years, 1881 to 1893. (In fact, we know the pigeons were sighted as late as 1899.)

Stanton points out that other species—the peregrine falcon, for instance—were headed toward extinction, but were brought back by massive conservation efforts. Stanton wants to know, once a species gets into real trouble, how long do we have to save them? How much do conservation efforts have to do with species’ rebound, and how much can be attributed to chance? She hopes that shedding light on the passenger pigeon case can help stop such future crimes before they happen.