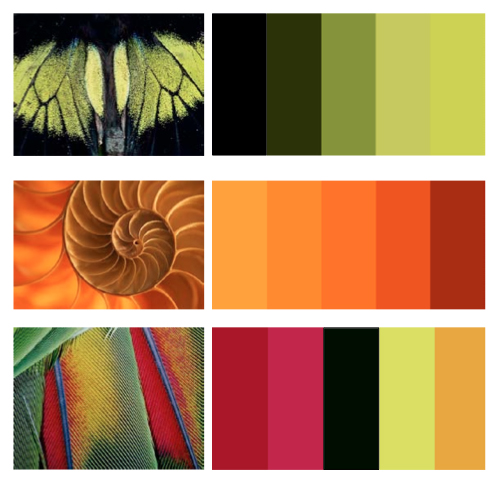 I’ve described in an earlier post what our current logo looks like and what all three images actually are. But we also have some specimens around of ancestral forms. Like any brand identity, the design process involved a lot of back-and-forth and extensive prototyping before the decision was made to commit to one version. This was all before my time, so I thought it was very cool to see documentation of those steps.

First, here’s a neat jumping-off point created by Aine McDonnell, the talented designer who developed our brand. It’s a collection of colour swatches derived from living organisms. This was a brainstorming technique to get some direction before there was a clear idea of what the logo itself would look like. The final colours are pretty close to shades found in the lower two options.

I think these business cards look great, but I can see why they didn’t get used; they’re a bit too “pretty.” It’s an attractive design, but the Talk Science to Me identity is more about clarity and (to an extent) simplicity. This concept looks more to me like it would correspond to a physical product; not so much a communications company. And the early iterations of the brand design were focused on creatures you could see, leaving out a huge swathe of our clientele who dedicate themselves to things at the microscopic and molecular scale. 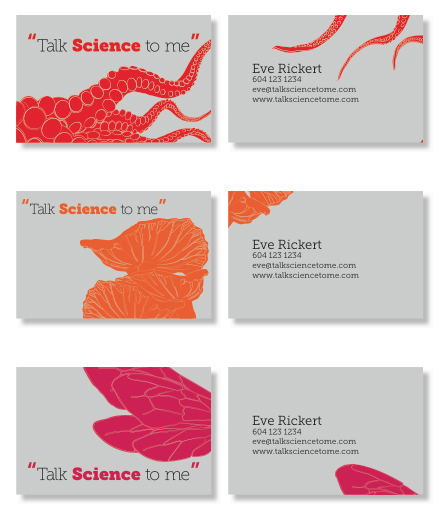 This early version of the logo is already pretty close to the final, but there are a few obvious differences. The cephalopod is present, but in the orange circle. And the other two figures are completely different. We’ve retained the biological theme, in keeping with our founder’s own passions, but given a nod to the micro and nano along with the macro. The molecule is dopamine—obviously a popular choice, but maybe not quite on-message. 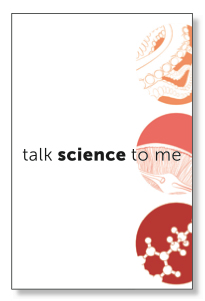 Early on, they tried out a different colour scheme. I like this one a lot, but it looks very aquatic. The green was deemed to be too cliched, given the number of our clients involved in sustainability, and the red-pink-orange a bit edgier and sexier. If we specialized in marine biology, it might have been a good fit, but I think the brighter colours work better for the brand. That’s still a diatom in the middle, by the way—just a different variety. 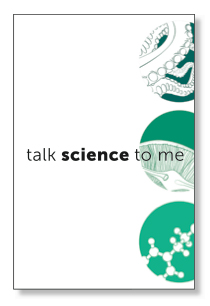 Here’s something a lot closer to what we use now. The colours are maybe a bit more subdued, and the diatom lacks some shading, but for the most part this is it. If you subbed this version onto my business card or any of the envelope or letterhead layouts we’ve tried, it would be easy to miss the differences.

Now that I’ve been (somewhat) thrown into the world of design, I think about it in evolutionary terms a lot. The designer’s judgment constitutes a whole slew of selective pressures, as do the demands of the client. Random mutations can occur, either through sudden inspiration or technical accident. And the occasional extinction event (of a hard-drive or a work relationship) will wipe out a developing species before it reaches its intended state.

It’s not a perfect analogy, but the similarities are enough that I tend to look at every logo now in the way I sometimes view living organisms: in terms of what came before them, and why the iteration I’m looking at is the one that wound up in front of me. Was this organism faster than the competition? Was its vision better? Was it more fecund? Could it metabolize something that others couldn’t? Did this logo test better in focus groups? Is the weighting of the text more legible at a certain scale?

If you actually enjoy playing this game, you can browse Logopedia and try to guess how some of the thousands of logos there (some famous, some obscure) came about.