#agarpocalypse, the other half of the sky* and Jamie Oliver 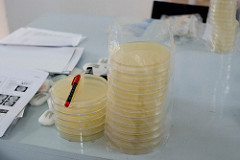 12 Feb 2016 #agarpocalypse, the other half of the sky* and Jamie Oliver

Posted at 14:57h in Science news by Amanda 0 Comments
0 Likes

Don’t worry if this alarming piece of (non-)news slipped past your radar at the end of the year: the world is running out of seaweed!

Not just any old seaweed, but the red stuff beloved of microbiology labs.

As reported breathlessly in the lab and science media, worldwide stocks of red algae seaweed from the genus Gelidium are in short supply. Although it is found in intertidal and deep subtidal cold and tropical regions all over the world (apart from around the poles), most harvesting takes place in only a few areas: Spain, Portugal, South Africa and Mexico, with Morocco being the major supplier.

Apparently, trade restrictions, overharvesting and increased pressure from the food industry have come together to limit stocks of this lab staple. So much so that late last year, lab consumables supplier Thermo Scientific sent around a memo to customers warning them of the low seaweed stocks. Only when this letter was tweeted out by concerned microbiologist Dr. Adam Roberts did the world appreciate the true potential horror of the situation: bring back the potato.

An explanation and a bit of history

Recently, I haven’t had a lot to do with agar agar, a gelatin-like product made from seaweed that is used to make culture plates in microbiology—that is, not until this first bit of news crept into my feed readers. No, it wasn’t #agarpocalypse that I noticed hitting the headlines; instead, seaweed was making waves because of one of those “invisible women in science” posts.

In the beginning, microbiologists had a problem with studying bacteria: there was no way to culture them in the lab. Pioneers like Robert Koch would use potato slices to grow the microbes, that is until his laboratory assistant’s wife suggested that, from her experience with cooking, agar agar might be a better alternative.

The trouble with growing bacteria is that they need a substrate to grow on and in that holds enough nutrient to sustain the colonies but doesn’t disrupt morphology. Fanny Hesse’s suggestion, agar agar, proved ideal for the job—so simple, so ideal, that she was written out of microbiological history for many years.

Her suggestion, agar agar, is perfect as a growth medium: it must be heat activated to generate its setting properties, and it is pourable when hot but remains a solid at room or, more importantly, incubator temperature. This means that batches of the stuff can be autoclaved for sterility, then poured into Petri dishes as a culture medium. Furthermore, the constituents of agar—sugar polymers derived from algae—are indigestible to most bacteria, preserving the growth substrate intact as colonies grow.

Better than both potatoes and gelatin.

My takeaway from this story: too much agar is going to food production. Eat more gelatin, people! #agarpocalypse https://t.co/D7bfZoFLpc

Back to the potato?

Although a few snippets of news slipped out after Christmas, the Internet has grown silent on the impending algal catastrophe. Questioning the only microbiologist I meet regularly in real life was disappointing—no, she didn’t know any labs that were stockpiling the product ahead of lean times. Likewise, my call-out on Twitter went unanswered, even by the initial tweeter who did try to pin some blame on foodies overusing the lab staple in cooking.

In summary, my limited research shows that bacteria will continue to be grown and characterized in research labs all over the globe. Spuds can breathe a sigh of relief, though ant farm owners and jelly makers might have to spend a little more on their hobbies.

* the other half of the sky, in case you were wondering