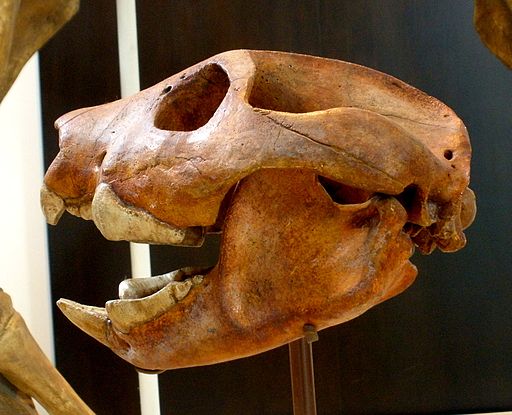 Posted at 08:59h in Science news by Jakob 0 Comments
0 Likes

Being a fan of science fact is a lot like being a fan of science fiction: every once in a while, a team of writers decides to obliterate your personal canon, seemingly because they hate you and want you to suffer. Actually that’s mostly just Steven Moffat; in the case of scientists it’s usually because new data has come to light or existing data has been reassessed. This time around, it’s old data that’s been reviewed.

The story in question, long one of my favourites, is that humans were a major factor in the extinction of various megafauna on several continents. “Megafauna” in Latin means “huge terrifying animal.” We’re talking things like the marsupial lion, a three-hundred-pound walking nightmare with creepy fused tooth-blades and quasi-opposable thumbs. And sharing a continent with that menace was Megalania: a carnivorous lizard bigger than a saltwater crocodile. I’m sure you’ll be stunned to learn that the land mass they shared would go on to become Australia.

The story I was told, and still want to believe, is that humans muscled those predators out of the ecosystem. Not by hunting them, but by competing for resources and changing the environment through early agriculture.

Apparently, multiple universities in Australia and the world at large have assembled an international team specifically to ruin my fun. Having conducted an analysis of available data, they’ve concluded that there’s no evidence linking humans to the extinction of the giant predators. Based on what we know, say some of the world’s most brilliant killjoys, it’s more likely that the climate did the monsters in. Not us, with our agricultural ingenuity.

And unlike a bitter sci-fi fan, I have to accept the verdict—at least for now. If they come for my terror birds next though, we’re going to have problems.

For now, I’m in the market for awesome/gruesome and evidence-based stories about early humans and other fauna (preferably mega, but I’ll take what I can get). Any suggestions?