NASA launches MAVEN, there is much rejoicing 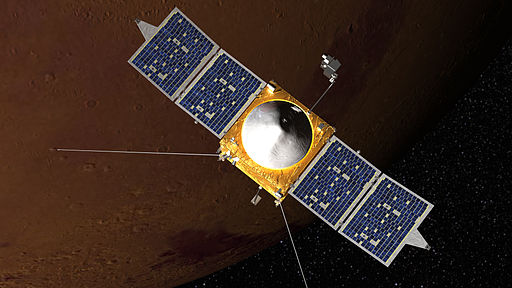 19 Nov 2013 NASA launches MAVEN, there is much rejoicing

Posted at 15:18h in Science news by Jakob 0 Comments
0 Likes

We’re talking about water on Mars! Again! I think even hardcore Mars nuts might be getting tired of this, which is kind of a shame because it is really interesting. With varying caveats, we’ve known for a long time that Mars had water. More recently we got confirmation that it still does. But a lot of that water is still unaccounted for. The geology tells us that there were vast bodies of water at one time; NASA is interested in finding out where that water is now. To that end, they shot another amazing piece of engineering, MAVEN, into space yesterday—but with much less fanfare than the Curiosity launch.

MAVEN’s mangnetometer. Not as cute as Curiosity’s camera, but still lovely.

I think part of the difference has to do with timing. Curiosity is still pretty fresh, so MAVEN is not quite as novel. Another issue might be that MAVEN hasn’t really been sold as technology porn, at least not with the same budget. Much of the fervor I saw surrounding Curiosity was (justifiably) centred on the vehicle itself. That’s an important story and an interesting one, but it seems like it might have more traction with the public than the research that rover was built to do. The truth is bound to be complicated, but for whatever reason, MAVEN hasn’t lit up the internet like its predecessor, and it happens that this mission has also mostly been sold on the science.

The science is really cool, though. We’ve gone pretty rapidly from thinking that there used to be some water on Mars to being pretty sure there was a lot. Enough to cover much of its surface. Recent findings made some headlines when Curiosity found evidence of what they call “neutral water,” which sounds like some sort of quack nutrition thing but is—I am told—the kind of water capable of supporting the kind of life that we know of. But Mars is very dry now, so clearly all of that water went somewhere. One theory is that it’s locked in massive ice caps below the surface. MAVEN is being sent to evaluate what I think is a much sexier possibility: that atmospheric conditions on Mars allowed solar winds to carry its oceans off into space.

To me this is a win-win. For one, the solar wind theory makes for a captivating image—the kind of thing that’s easy to promote as worth knowing for its own sake. But if all that water became ice? Still amazing—because it has major implications for the feasibility of a long-term Mars colony. And the martian atmosphere, which is what MAVEN is designed to study, also matters. So if you’re the kind of person who likes to speculate about the possibility of putting humans on the surface of another planet, yesterday was a very good day for you.

Granted, terraforming is not everyone’s cup of tea. As one Cambridge Astronomer told the Guardian in 2004, “We are mucking up this world at an incredible pace at the same time that we are talking about screwing up another planet.” And I sympathize with that position as well. But I think that knowing is still worthwhile; I like reading about the deep ocean, but I have no ambition whatsoever to visit it. And if you’re already a fan of the existing rovers, you can rejoice in the fact that MAVEN carries relays that will help us to communicate with them.

For those in science or science communication, MAVEN’s launch can be counted as a small victory: in the face of government shutdowns, muzzling and budget cuts, it’s nice to see research like this get done. The challenge is to keep reminding people that science matters, and that exploration is not a luxury. We like to think of the Earth as our home, and it is. But it’s good to go outside sometimes.