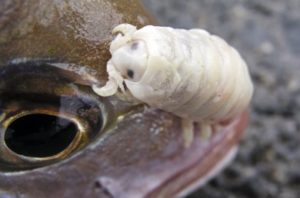 One of the things I love about science is the appreciation it can inspire for things I might otherwise consider horrifying, or just gross. One great example of this is Cymothoa exigua, also known as the tongue-eating sea louse. I should mention that the animal in question doesn’t necessarily “eat” the host’s tongue in the conventional sense: It latches on and consumes blood and mucus until the tongue completely shrivels up. Then the isopod crustacean stays right where it is and switches to just grabbing part of whatever the fish eats and slowly growing larger, before eventually detaching and swimming away. A few things about this before we go back to the whole wonder and fascination part…

First, if this doesn’t seem very healthy for the fish, that’s because it’s not. That much is pretty intuitive. What’s odd is that it’s not as unhealthy as you might imagine: while the overall fitness of host fish is negatively impacted, tongue-replacing isopods rarely cause death by themselves. Fish can apparently live just fine without a tongue, even if a parasitic arthropod is hanging around in the tongue’s usual place. Second, and most importantly, there are no documented cases of tongue-replacing isopods inhabiting human mouths. Though of course, terrestrial lice have been known to take up residence in other places.

So why is this creature a treasure? Partly because it really is really gross. It may not be exactly clear what draws science people toward things that send other people running, but we’re pretty sure it isn’t just us.

Science communicators often work really hard to promote the beauty to be found through science, and that’s valid, but beautiful things are not the only interesting or rewarding things. And they’re certainly not the only things in nature. Most people are pretty used to the idea that not all art needs to be “beautiful” (aren’t they?). I think the same should go for science. And in any case, C. exigua is an excellent challenge to our conventional standards of beauty. We often think of things as beautiful that are extremely efficient and optimized for a given task—whether that task is making loud noises, driving in circles, or killing.

Whether you think of it as beautiful or not, C. exigua is definitely efficient and optimized. And I know, the whole “giant bug living in your mouth” image hits at some very deep, fear-producing mechanism in the brain. But from a certain perspective, that’s pretty interesting too. It seems to me that anyone who appreciates the artistry of H.R. Giger should also be able to spare some kudos for natural selection. 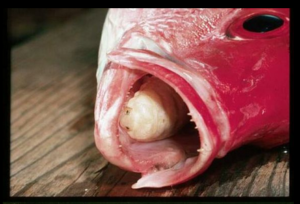 It also becomes clear, if you do a little research, that, the tongue replacing louse is far from most dangerous isopod around (or the biggest). I asked an accomplished marine biologist about C. exigua and he immediately named two examples of what he considers the really nasty isopods: there’s little information about them online, but apparently they eat significantly more blood and tissue than C. exigua does. The biologist also noted that sea lice are somewhat unusual in their lifestyle; many parasites survive by going undetected. C. exigua climbs right into the host’s mouth (through the gills, if you were wondering), poses as a tongue for a while (fooling precisely no one, I suspect), and then bails out to moult before doing the whole thing again. I’d say that takes a lot of nerve, but isopod nervous systems are actually relatively primitive.

It still might seem odd that there’s a whole cohort of people out there who find tongue-replacing lice so fascinating, but is it really that strange in the context of all documented human fixations? As for the visceral horror angle, try watching a few minutes of Toddlers in Tiaras sometime.

I did, and had to spend an hour googling liver flukes before I could eat again.

Many thanks to Dr. Matthew Gilligan, Dr. Alistair Dove and Dr. Richard Brusca for their feedback on this post, and to Dr. Gilligan for the generous permission to use his images.