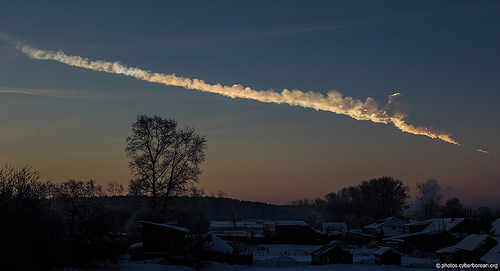 Posted at 14:50h in Science news by Jakob 0 Comments
0 Likes

My friends and I all have vivid mental pictures of the Tunguska Event, probably because of Carl Sagan’s retelling of it in the original Cosmos series. Recently, another region of Russia—the Urals—was jolted awake by a similar, though smaller, event.

This one caused more casualties than any other strike on record. Reports are that close to 900 people in the city of Chelyabinsk were injured, though no deaths are being reported so far.

In summary: an object from space entered our atmosphere at approximately Mach 33, exploded over a populated area, injured hundreds and did massive structural damage… and absolutely no one predicted it. Stuart Clark at the Guardian correctly understands this incident to signify a major issue in science communication: specifically, why basic research matters. Now, as the event begins to fade from the news cycle, it’s wise to keep the larger issues signified by it in mind.

As Clark puts it:

“There could be hundreds of thousands of these smaller asteroids waiting to be discovered. Were something of this size to strike the Earth, it would devastate an area the size of larger than London. [sic.]”

We do have a few ways of improving our ability to respond, but even detecting things this small and fast is still a major challenge. Once we can do that we can start thinking about ways to redirect or intercept them. But we can’t do either from here on the ground.

Many people, myself included, feel it would be worth going into space for the sake of knowledge alone. But many others feel that such exploration is frivolous and wasteful. To satisfy those alleged pragmatists, it seems we have to turn to asteroids, one way or another. On the one hand, there are the potential resources to be gained from mining them. And on the other, a crystal-clear message from the universe, scorched into the sky: “Think fast.”