Posted at 17:11h in Science communications by Amanda 0 Comments
0 Likes

Why support crowdfunding for science research? 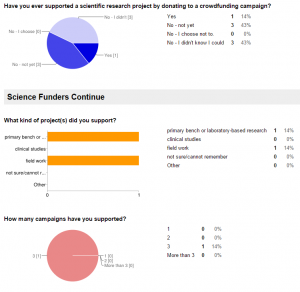 We were curious about this question, and we decided to take the opportunity presented by the annual meeting of the American Association for Advancement of Science and the first conference of the newly formed Citizen Science Association, which both took place in San Jose last week and this weekend. We put together a short survey and tweeted/blogged/Facebooked it to the attendees and our followers: to you laypeople, this is what’s known as a “convenience sample” (convenience sampling is the reason so much basic research is done on university students). We figured a few thousand people keen on advancing science generally and citizen science in particular would be a great way to find people who had supported science crowdfunding.

The response, unfortunately, was not what we’d hoped. We had seven responses, with one respondent giving reasons for supporting science via crowdfunding. A huge thank you to those who participated. While we sure won’t be publishing any papers with these responses (and that was never the plan anyway!), we can talk about the data points we got—and for those who are keen to learn more, we’ve added some links at the end. 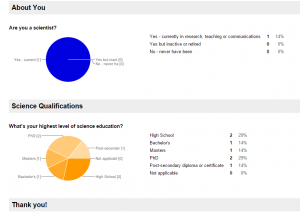 Of the seven respondents, we found that only one had supported science by donating to a crowdfunding campaign, but this individual gave to three projects in total. These were primarily lab- or bench-based research projects, and the donor knew the researcher. With a PhD and currently working in research, communications or teaching, the respondent cited “It’s for the benefit of everyone” as their reason, and answered our question “I helped crowdfund a scientific research project because …” with “I am a scientist and know how hard it is to get funds.” Thank you. 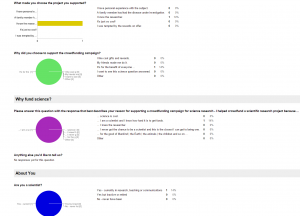 For the remaining six, who had not supported a science crowdfunding campaign, three didn’t realize such a method existed, while the others said “not yet.” The highest level of science education attained ranged from high school (2), post-secondary diploma/certificate (1), bachelor’s or master’s (1 each) and PhD (1). Our survey did not ascertain if the respondents were working scientists or not. Thank you to each of you, too.

We’re disappointed we didn’t learn more, but we’ve learned something about future survey methodologies! But we hope that the six respondents who either had not heard of science research crowdfunding or had not donated yet will each go on to support three campaigns each!

If you would like to learn more about crowdfunding campaigns for science research, there are a few resources available online that make interesting reading. I’ve rounded up a few in the resource list below, along with links to some of the fundraising platforms mentioned.

Gray, R. (2015) “Crowdfunded science: harnessing the wisdom of the crowd, or selling out?” The Guardian | Science

Larkin, M. (2013) “How to use crowdfunding to support your research” ElsevierConnect

POV from a Researcher