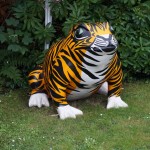 Posted at 10:07h in Science news by Amanda 0 Comments
0 Likes

For a former protein scientist, the arrival of the HUPO World Congress in Vancouver is a Big Deal. First, one of my ongoing Talk Science to Me projects is a subcontract writing primary research reviews for a proteomics blog. Second, I am a proteins #fangirl.

Whenever I think about proteins, Tigger’s song floats around my head, for proteins are indeed wonderful things (not to mention flouncy, bouncy, trouncy, pouncy, fun fun fun fun fun…but that could just be me)[1] to study, as I remember from way back when I sat behind a bench.

Need to get a cellular reaction going? Call in an enzyme to get the reaction moving; all enzymes are proteins (yes, I am ignoring catalytic RNA molecules…).

Growth stimulation, puberty, water balance? All involve hormones, many of which are…proteins!

Over a decade ago, scientists mapped the entire human genome, labeling genes and locating them on the different chromosomes. Only in the last 18 months has the same has been accomplished for the human proteome, which comprises the data set of all proteins, the genes they come from and where they are produced in the body.

The human genome contains between 20,000 and 25,000 protein-encoding genes among the more than 3 billion DNA base pairs scattered across the 23 chromosomes.[2] The human proteome comprises just over 30,000 proteins (and rising) that translate your genetic inheritance into action. But far from being a one gene–one protein with a single action system, the proteome represents the body’s dynamic response to a constantly changing environment.

Proteins comprise a primary structure that is a chain of amino acids stretching from N-terminus to C-terminal tail. From this, a secondary structure arises where the primary amino acid chain forms alpha helices (the springs!) and beta sheets (the flounces—okay, I’m stretching things here, but stay with me…). So, from a linear structure the protein starts to form a 3-dimensional shape. From this, the tertiary structure can fold on itself, depending on attraction and repulsion between charges on amino acid groups, and this ultimately determines quaternary structure formation, where protein units aggregate together as active units.

There are two key things to remember here:

However, this isn’t the final story. Proteins are also modified after they are created. Post-translational modification (PTM) can add molecules (sugar groups, lipids or phosphates among others) in addition to lengthening or shortening the chain itself by adding or subtracting amino acids. PTM-induced changes to primary structure ripple on down the protein pathway, influencing helix formation, folding and protein aggregation, and altering activity itself. Thus, instead of activating a receptor, a protein isoform merely blocks it; a key cell transcription factor doesn’t work and a regulatory pathway is silenced, allowing cancer-forming DNA mutations to escape unnoticed; a vital protein heads straight for destruction instead of performing valuable work—all due to a subtle change in structure.

So, from a finite but as-yet-undefined source for encoding proteins, the body is capable of fine-tuning its response depending on the environment (nutritional status, disease, age) in which it operates. It is (to me) a surprisingly sophisticated and exciting system that encourages a lot of creative experimental thinking once you start to understand it: If protein A is changed, will it still attach to receptor AR? Is the isoform detectable in blood, and does it signal disease? How do we measure it? Can we change it with treatment?

These are questions asked daily. In the last two years, I’ve reviewed primary research papers tackling the triple negative breast cancer proteome, searching for clues on personalized treatment and avoiding chemotherapy resistance; I’ve written about proteins involved in infertility, Alzheimer’s and psoriasis; and I’ve tackled papers hunting for biomarkers, for diagnostic markers that monitor response to arthritis treatment and seek out macular degeneration. All of these research teams are looking to proteins for the answers.

The scientists, clinicians and instrument manufacturers visiting HUPO 2015 this week are tapping into this wonderful world to advance science. As researchers discover more about proteins, their regulation under health and disease, and how to detect these changes effectively, diagnosis becomes easier and treatment more effective.

[1] Or maybe not just me—check out this trippy 1970s video on how proteins are made!

[2] And don’t forget about the DNA bundle in mitochondria.