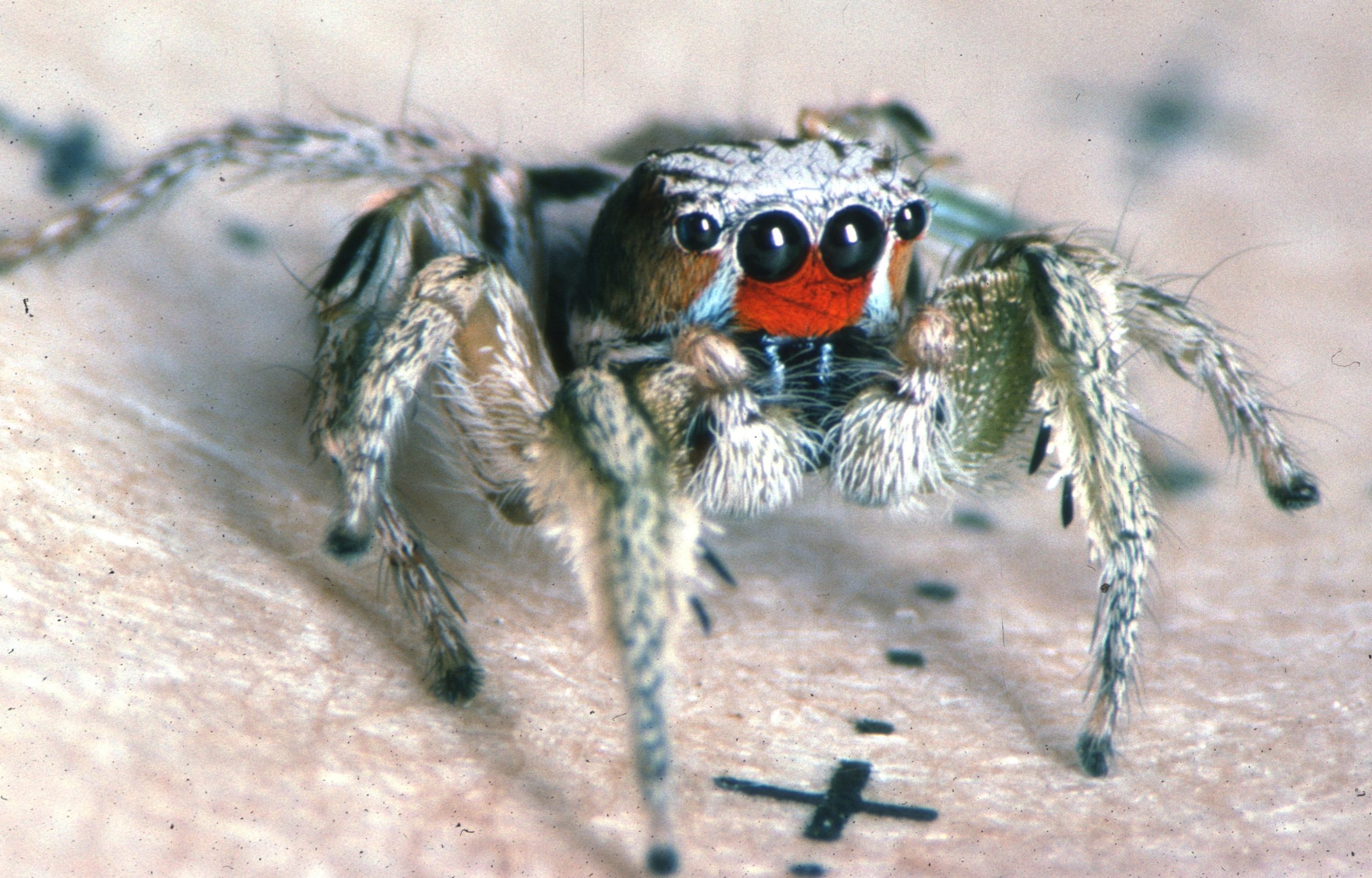 Posted at 15:17h in Treasures by Jakob 0 Comments
0 Likes

This should be evident from the title, but in case it’s not: If the combination of the words “jumping” and “spider” disturbs you, this is not the post for you. But if spiders only make you a little uncomfortable, I suggest sticking this one out, because from the perspective of animal behaviour and physiology, these things are cool. They’re also really small, so if for example you had a traumatic experience once involving a very large spider crawling onto your hand without you noticing (hypothetically of course) the miniature marvels that I talk about in this post should seem friendly enough.

So bearing in mind that I am very sympathetic to the visceral reactions that our arachnid brethren can inspire, let me back up my claim that these guys are different: They (Habronattus coecatus at least) can’t bite people, they don’t spin webs at face-height, and they are seriously (seriously!) adorable. Look:

They’re also the only arachnids I’m going to write about here—I’m not going to surprise you with a picture of a mother funnelweb or anything like that.

So what’s the big deal about some tiny spiders? Why do these creatures get to be treasures while their decoy-creating relatives don’t? One reason is that here at Talk Science we have a major interest in communication. And we like to think we’re pretty good at it. But we also know that it’s useful to get some perspective every now and then by watching a real pro in action—and nature is where you look to find the serious pros.

Like we do, jumping spiders devote the most effort to communication when they’re courting. Males show off bright colours and put on complex vibratory displays by creating sound waves in the substrate.

And when we say complex, we mean structurally more complex than some human music. Scientists have identified as many as 20 basic building blocks, which are organized into different “motifs.” These motifs change depending on how courtship is progressing. The ability to master musical vocabulary and deploy it in an aleatoric interaction is something most humans take years to cultivate. And these spiders have a lot more to worry about than a disappointed audience or even an airborne bottle. While I can state categorically that a bad gig is no joke, the male jumping spider’s performance occasionally ends with the audience eating him. Think about that the next time you’re anxious about a date. Actually, don’t. It probably won’t help. 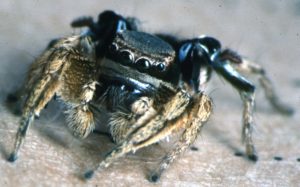 There’s more, too. Not only does the male’s “song” have an identifiable and fluid structure, the choreography has plenty of variety and variability as well. It even includes waving with a foreleg—the same way humans get each other’s attention sometimes. You can see a similar dance routine, by the Australian M. volans, here.

H. coecatus and its relatives also have some serious sensory equipment on board to take in all of this information. Their eyes are sharp—with angular resolution better than a cat’s and not as good as a dog’s, but much smaller than either. Don’t underestimate the evolutionary feat of getting equipment this complex and sensitive into such a tiny package. It’s a bit like someone figured out how to get the optics of a full-sized camera into something smaller than your phone camera. The one trade-off is a narrow field of vision, but they partially offset this by moving the retina itself to point at areas off-axis. They also see more colours than we do, with a sensitivity spectrum that includes everything we can see plus ultraviolet.

Looking this over, I notice I made a lot of comparisons to humans and other familiar animals in making my points. That’s a fine strategy, but it’s also worth thinking about how we can come to understand spiders and other relatively “unsympathetic” life forms on their own terms.

Our thanks to Wayne Maddison for his extreme patience in fact-checking this post, as well as the beautiful images you see above.