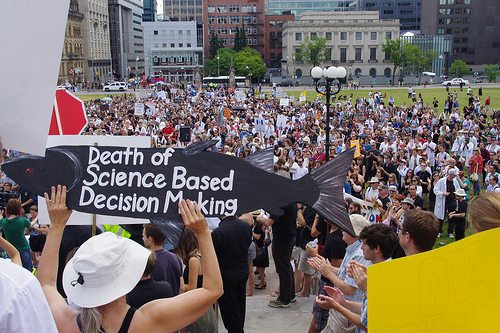 Posted at 17:20h in Science communications by Jakob 0 Comments
0 Likes

As of this moment, across Canada, there are government appointees who have veto power over new scientific data. This sounds like an exaggeration, but it isn’t. An adjustment to intellectual property law has made it possible for Canadian officials to block new studies from being published. They have stated no intent to use their new power this way, but nor is there any published set of standards on which they’re meant to base their decisions. People at the Science Uncensored project are understandably upset.

While these and other developments in Canadian science policy are alarming, the high-profile debates rarely do more than scratch the surface of the many ways in which scientific institutions have been adapting to non-scientific pressures. While scholars and researchers have been observing the trend for years, the deeper structural problems are hard to explain and don’t easily conform to simplistic news-ready formats.

One indicator of the kind of frame the Uncensored movement is employing is its use of language. The word “unprecedented” suggests that this move was sudden and surprising, or perhaps that it lacks legal precedent. It’s incorrect in either case. The subjugation of scientific endeavours to corporate interests and political ideologies has a very long history indeed, and in my experience, most scientists are quite aware of that.

Victor Dwyer’s story “Academia Inc.” articulates many of the core problems very clearly: “A growing chorus of critics point to what they say is a distortion of the research agenda–a slow but steady turning away from basic, curiosity-driven questions, in the quest to pose ones that private industry finds relevant.” He also covers the increasing reliance of universities on corporate sponsorship for funding, and even gives one example of an entire degree program being built to the specifications of industry employers. That article was written in 1997 (for Macleans), and the commoditization of science has only been picking up speed since then. Silencing researchers who produce unpopular results is, of course, an attack on the entire scientific enterprise. Let’s just not forget that voluntary silence kills studies too.