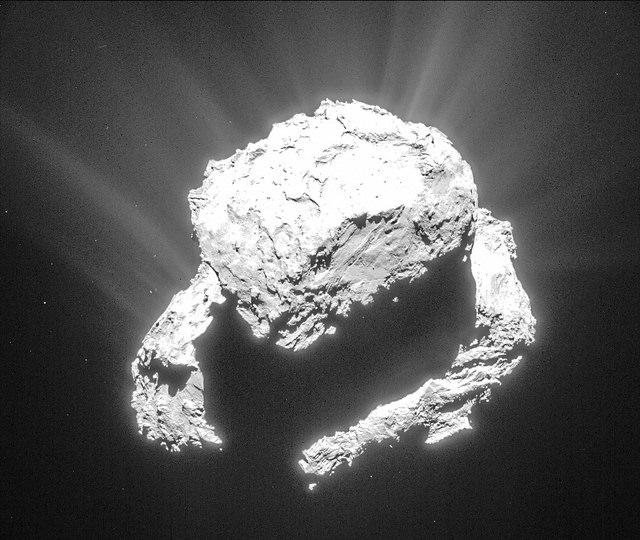 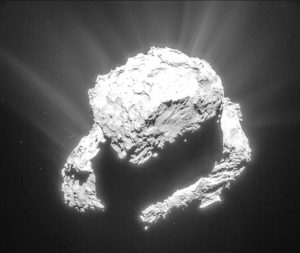 This single-frame Rosetta navigation camera image was taken at a distance of 71.9 km from the centre of Comet 67P/Churyumov-Gerasimenko on March 9, 2015. The image has a resolution of 6.1 m/pixel and measures 6.3 km across. The image has been processed to bring out the details of the comet’s activity.

Okay, strike that — as you know from previous blog posts, we’re passionate about science and unafraid of wearing our hearts on our sleeves. When little Philae crashed onto Comet 67P/Churyumov-Gerasimenko almost two years ago, staff joined many others around the world in getting a little teary about its last tweet. As the lander, lost and off course, settled into what could have been a terminal nap, we were left with the image of the ever-present Rosetta orbiter circling a lump of icy rock in deep space, hovering expectantly for its little friend to wake up and communicate once more. Definitely Pixar-worthy!

And it’s happening again. This Friday, September 30, Rosetta’s mission managers at the European Space Agency (ESA) are set to crash the orbiter on a one-way trip to the comet’s surface in a final flurry of data collection. They are hoping that files from this terminal moment can be transmitted before impact and inevitable shutdown.

So why has this mission been such an engaging and emotional one? The answer has to be communication: ESA communicators have tickled all senses and emotions in the final two years of a journey that began back in March 2004 with liftoff from French Guiana.

Information relay through science papers, blogs and social media has aimed to engage as wide an audience as possible, both general interest and academic research. The Twitter accounts, and even the imaging system on board Rosetta, introduce themselves with “I am…” and then chat like travellers keeping in touch with friends back home. Animations bring the two spacecraft to life, giving them human emotions as they prepare to adventure into the unknown. Even if you don’t know much about comets, the videos, plain language blogging and emotive tweets make you hungry to learn.

Not only has the communications strategy covered the five senses, but the storyline nailed just about every essential dramatic hook in addition to covering all the major rhetorical bases.

We’ve had a plucky hero on a quest, a challenge to overcome, conflict (and not just #Shirtgate) and resolution. We’ve even had star-struck lovers (okay, maybe the Rosetta-Philae relationship is more like mother and child), separated, lost and found, and then doomed to spend an eternity in each other’s embrace far from home. With emotional pull backed by credibility from the source, the strong narrative viewpoint from both lander and orbiter in highly accessible language brought daily life on a comet and data streams from spectrometry readouts alive across print and digital mediums.

And soon it will all be over. Maybe this time, the tears will be tears of joy. Only at the beginning of this month, mission managers located the lost Philae lander stuck in a crevice of Comet 67P/Churyumov-Gerasimenko, broadcasting photos of a single arm outstretched from beneath a cliff. Although Rosetta’s final landing place can only be determined in the final hours of descent due to the gravitational and environmental effects of orbiting closer to the comet, at least the two craft will be heading off into the sunset on the same ticket through the universe.

… if deep space has sunsets…sniffle

… only one question: Matt Damon to play the marooned lander with Sandra Bullock orbiting helplessly as Rosetta, or maybe Matthew McConaughey screaming “Philae!” into his spacesuit …?

You can follow along with the live stream descent with ESA scientists on the Rosetta blog.