Tidying up the edges 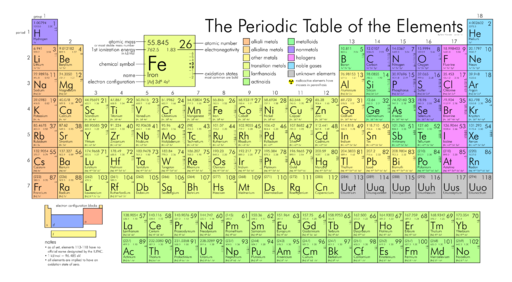 Amidst the excitement of the usual first-baby announcements and the seemingly impossible stories of twins born in different years that herald the start of another new year, you may have missed this snippet: the global science family also welcomed some new additions.

Elements 113, 115, 117 and 118 are now officially recognized by the Powers That Be (in this case, the IUPAC, or International Union of Pure and Applied Chemistry) and thus complete row seven in the periodic table of the elements. For those who struggle with the unease generated by asymmetry and ragged edges, this comes as a welcome relief.

It will also no doubt be a relief to the research teams from Japan, Russia and the United States who have been working hard to get their results recognized over the last decade.

So, as with all birth announcement: what was the birthweight, and is there a name yet?

Well, the new additions are being described as super-heavy (ouch!), ranging from an atomic mass of 284 for element 113 to a bouncing 294 for element 118.  They also answer currently to their placeholder names—the uninspiring ununtrium, (Uut, element 113), ununpentium (Uup, element 115), ununseptium (Uus, element 117) and ununoctium (Uuo, element 118)—but not for much longer. The IUPAC allows the happy parents to choose from mythological concepts, minerals, countries, properties or scientists (usually dead scientists) for better descriptors.

Finally, don’t rush out for a visit or to buy gifts. As with many of the later additions to the periodic table, elements 113, 115, 117 and 118 are only occasionally present. Since they form synthetically (!) from experimental collisions between nuclei, they quickly decay into “unknown isotopes of slightly lighter elements” that have themselves not yet been identified.

They grow so fast—in the blink of an eye!